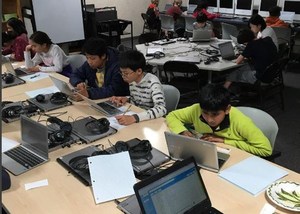 Three Easterbrook Discovery School (EDS) students were chosen out of almost 50,000 applicants from across the country to participate in MathCON; a prestigious academic competition hosted by Concept Schools in Chicago later this month.


Students from 43 states in public, private, charter and home schools took the initial online exam at their school to qualify for MathCON, which will be held at the University of Illinois at Chicago on April 22.  The day-long event brings together elementary, middle and high school students to compete for various prizes and national prestige through various math questions.


MathCON was created in 2008 by Concept Schools as a Midwest competition with just 125 participants, and has since grown into a national event.  MathCON’s goal is to engage students in STEM outside of the classroom and encourage more students to enter the STEM fields, which are currently some of the fastest-growing industries in the country.  Students nationwide compete across several mathematical disciplines: algebra, geometry, measurement, data analysis, number systems and pre-calculus.


“We’re incredibly proud when any of our students earn recognition for their accomplishments, and we’re so excited to have ten students from four of our schools representing the Moreland School District,” Superintendent Mary Kay Going said.  “STEM is such an important part of the future and we actively encourage our teachers and students to find fun ways to use STEM inside and outside the classroom.  This is a great honor not only for these students, but also for their schools and the Moreland School District.”